Why Women Love Men with Beards?

Why Women Love Men with Beards? 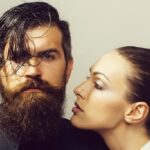 If you’re the type of guy who likes to let his beard grow in, and you are looking for love, you’re in luck. It turns out that women often prefer men with facial hair, and this is backed up by research.

According to Psychology Today, studies have been conducted to figure out how women perceive men who have beards versus those who are clean-shaven.

Basically, the research went like this: women were asked to rate photos of men’s faces, but the pictures were altered digitally so they would display varying amounts of facial hair, from no facial hair at all, to a short or full beard, with different amounts of stubble in between. The women were asked to rate the photos based on how dominant, socially mature, attractive, aggressive, and masculine they perceived each man to be. And they were also asked whether or not they’d want each man as a partner.

What were the results? Well, light stubble was deemed the most attractive, but men with full beards were deemed the most masculine, socially mature, and aggressive. Beards also made the men appear older. So, if you’re using online dating apps and https://meetville.com/catalog/us/il/90017/woman to meet more women, it’s worth keeping this information in mind when figuring out how long your beard should get.

How to Put This Information to Good Use

Now that you have a general idea of how women perceive men with beards versus without beards, you can put this info to good use, whether you’re looking for Naperville woman near you on dating site, or singles in a big city like Los Angeles.

Here are a couple of points to remember: if you want to appear as attractive and sexy as possible to women, go with short stubble. If you want women to look at you and think of how masculine you are, let your beard grow in. And if you’re looking for a relationship that will be long-term and give you the chance to start a family, consider letting a full beard grow in, as women tend to view men with full beards as having higher parenting abilities.

Beards Are Better Than Mustaches

Generally, women prefer full beards rather than mustaches on men. A small percentage of women do prefer men who only have a mustache, but many more ladies want a man who has a beard and a mustache.

Again, men who have beards are viewed as more masculine. And this perception of masculinity appears to increase when women are at the most fertile point in their cycle. So, as mentioned above, if you want a long-term commitment and you are hoping to settle down, growing your beard might be a good way to attract more women who want the same things.

If you’re dating, and you want to see if women are more attracted to you with a beard versus short stubble or a mustache, feel free to experiment. After all, your beard will always grow back even if you try going clean-shaven for a while, so there’s nothing to lose. You might discover that you are able to attract more ladies when you post photos of yourself sporting a full beard than when you are totally shaved. Who knew such a simple change in the way you look could have such an impact?